Otter on the River Otter

Since lockdown 3, I have mostly been wandering the River Otter as part of my daily walk and I was very pleased to see my first Otter for a number of months on Monday 10th January. It or another animal was also present on the 11th January.

Birds of note in recent days have included at least 2 Dippers singing at times, Grey Wagtail and at least 1 Water Pipit.

Well, once again Helen and I ventured out to try and crack the magic 100 species within an 8 mile radius of Budleigh. Frustratingly, we finished the day on 97 species, the same total as for 2015 and 2016! However, 97 is a very respectable total, even though not the hoped for magic number, and still a very enjoyable day!

It was a bitterly cold day as we started at -3 C and the temperture did not rise above +3 C all day. As a result our starting point at Bowling Green was pretty much entirely frozen!

First bird of the day was Tawny Owl and by 1pm our tally was 70 species.

Last bird of the day was Dartford Warbler.

Well that was certainly a very strange year for everyone! Regardless of all the doom and gloom of Covid in the world, it certainly reinforced just how very lucky we are to be living in East Devon where we had access to such great countryside on our doorstep during lockdown. It was somewhat ironic that although a difficult year in many ways, it was also my personal best year for rarity finding!
I enjoyed "purple patches" locally in Devon during May and then on St Martin's, Isles of Scilly during October. The tally of personal finds for Devon was particularly satisfying because all the birds were within walking distance of home!
SPRING
15th May: 13 Bee-Eaters on my patch!
23rd May: Blyth's Reed Warbler and Devon's first spring record.
26th May: Golden Oriole singing on the Pebblebed Heaths.
29th May: Marsh Warbler although not found by me, it was still exciting to identify the bird at Tipton St John, just 7 miles from home! All thanks to friend Dave White who called me about an odd song that he had heard earlier that morning and I knew I needed to check it out! It was the first accessible bird in Devon since 1990.
AUTUMN
During the autumn, it was the Isles of Scilly and beloved St Martin's that once again produced some exciting birding.
7th October: Red-eyed Vireo. My only BB rarity of the year and amazingly my 3rd Yank passerine "find" on this island in just 12 months!
14th October: Radde's Warbler
16th October: Pallas's Warbler and RB Flycatcher
Aside from the personal rarity finding excitement, there were still plenty of other highlights and excluding the months of Jan and Feb, all were in South West England.
Below are some of my most memorable highlights from the year.......

It is always a pleasure to return to the beautiful Sierra de Andujar each winter in search of Iberian Lynx and it was another successful tour. Jan 2020 Tour Report

California in winter has so many wildlife spectacles with hundreds of very confiding waders, California Condor along the stunning Big Sur coastline, fantastic cetaceans in Monterey Bay, Bobcats around Point Reyes as well as many other great birds and a superb spectacle of thousands of Snow Geese! Feb 2020 California Trip Report
Minnesota was spectacular as always with wonderful views of Canada Lynx and some quality birds too! Feb 2020 Minnesota Trip Report

MARCH - APRIL: Patch Ruff & Garden Goshawk
MAY: Purple Patch Birding & NOCMIG Garden Quail
Like During the Spring lockdown, similar to many other birders in the country, I soon became hooked on recording nocturnal migrants passing over the garden (NOCMIG). It was very addictive and I had some exciting species including Stone Curlew, Quail and Nightjar! More NOCMIG recordings can be heard on my Sound Cloud https://soundcloud.com/christownend
Blyth's Reed Warbler recording above and Golden Oriole below
The full account of the Marsh Warbler cab be found HERE
JUNE - JULY: Insects, Reptiles & Dartmoor Dunlin Monitoring

I had some frustrating views of at least one Water Pipit a few days ago and suspected there were more, but the light was disappearing quickly. Despite looking over the last few days I have failed to re-find them until yesterday, when I counted 12 birds and then 13 birds today. Pretty much the same time last year I had at least 12 birds in the same fields - I wonder where they spent the Summer?

Over the weekend Helen and I came across a flock of around 25-30 Crossbills on East Budleigh Common. Whilst watching the flock I was struck by at least one bird which appeared to show a fairly large looking bill but I was very aware of the poor light and I didn't have my camera. The flock then disappeared but I did get some sound recordings.
I returned on Sunday with my camera to find the flock still present and I obtained some photos and more sound recordings. The weather was quite wet, so I focused on getting as many photos as possible rather than taking time to study the birds in the field.

In summary, I managed to obtain sound recordings of "flight calls" from the flock and "excited calls" of at least one bird but I was unable to attribute the recordings to specific birds that I photographed. The recordings can be heard below and all clearly suggest Common Crossbill by ear and from the spectrogram.

On reviewing my photos, most birds' bill structures seem as you would expect for a "normal" Common Crossbill, but I was interested to see at least of couple of birds appeared to show quite obvious deep bill structures. One bird in particular (bird 4 wing-barred) looks strikingly large billed in the last photo of the sequence, with a strong gradual curving of the upper mandible and quite a stout lower mandible, superficially similar to Parrot Crossbill. Despite being very rare, it would be odd to show wing bars in this species.

I am very aware of how different angles and open bills in photos can give very misleading impressions. Some of these birds appear to be large-billed Common Crossbills and the sound recordings suggest nothing other than Common Crossbill.

Despite some good photos, they were surprisingly secretive and not easy to study as they disappeared into the pine trees to feed. I had a look today but couldn't re-find them. I will keep looking because I am very keen to see the flock again as Crossbills are certainly an interesting and variable group! 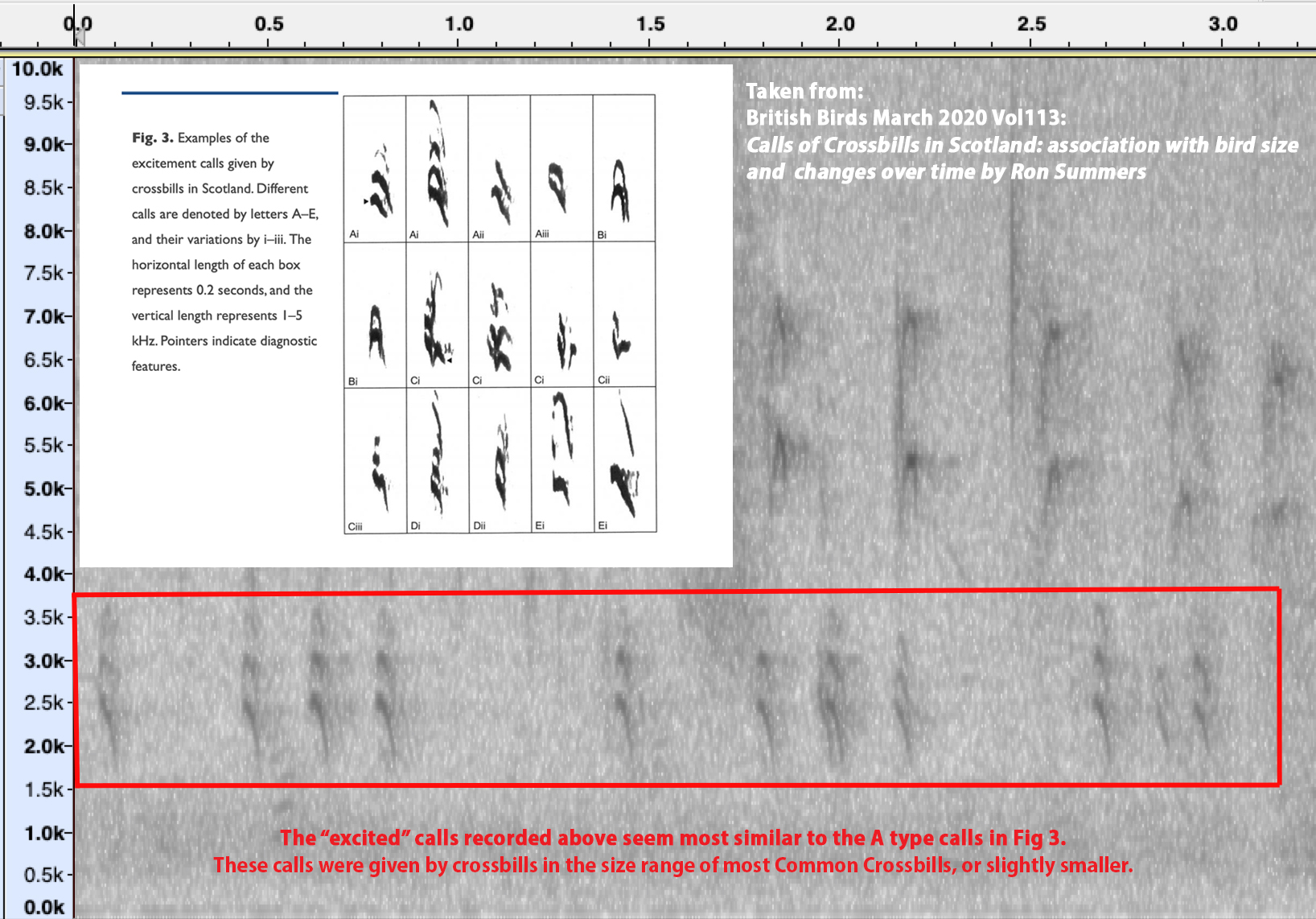