Thursday 7th January
Still good numbers of thrushes (Fieldfare and Redwing) around today, but nowhere near the big movements of yesterday. Lapwing numbers were back to normal with no more than 15 birds on the Otter today - Was yesterday a dream!?
Highlights today included 4 Cetti's Warbler, 3 Water Rail (2 birds showing very close in one of the streams), 2 Grey Wagtails, the Siberian Chiffchaff still frequenting the pool and nearby stream, 2 collybita chiffs, 9 Brent Geese, 1 Kingfisher, 1 Little Egret, an excellent count of at least 154 Snipe on the Cricket Pitch and the next 2 adjacent meadows, 31 Curlew, 1 Whimbrel 3 Little Grebe, a drake Gadwall, a Peregrine and a Yellowhammer heard along the main trail was an unusual record.

However, it was the sea that was the top trump today. After scanning the sea in the morning, I found nothing, but at around 1.30pm, as if by magic, 3 RED-CRESTED POCHARD appeared! Quite strange to see these dabbling ducks on the sea in close proximity to 12 Common Scoter, an RB Merganser and the lone female Eider! It turns out there has been a mini influx along the coast today with at least 13 in nearby Dorset - Probably birds from The Cotswold Water Park due to freezing? Or maybe birds from the Continent? Either way, it was worthy of a celebratory Maple and Pecan Nut Slice from the Lawn Bakery!

Also today, female Bullfinch and Blackcap in the garden again and late news for 5th Jan - Great-spotted Woodpecker on the nut feeders makes it to number 44 for the garden list - Wooo Hooo!

With the cold weather set to continue - Who knows what the next surpsise might be.......

More Images of the BIG FREEZE 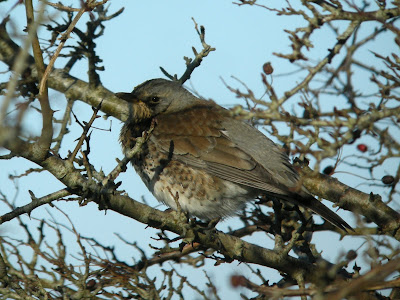 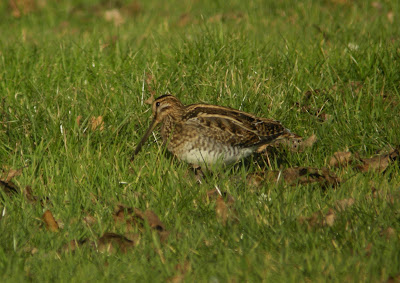 Redwings on the Cricket Pitch 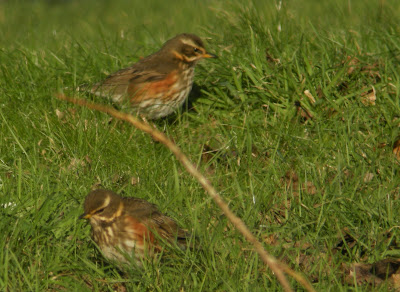 Six of the nine Brent Geese 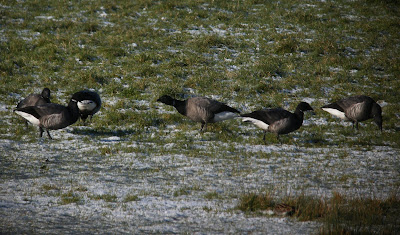 The worst ever shot of 3 Red-crested Pochard! 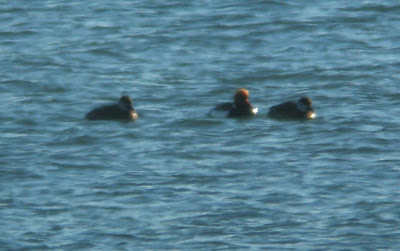 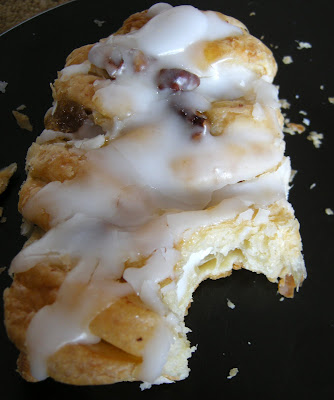