Tuesday 7th September
After a rather fortuitous cancellation of some seabird survey work yesterday that would have put me at sea for 3 days, I slipped out to the patch this morning and headed along my usual route. Just before getting to one of the scrapes, I met a dog walker who casually asked if I had seen the Glossy Ibis? Somewhat disbelievingly, I said no, to which he replied "yes, 18 of them." He continued on his walk,as did I scanning the usual fields that I usually do, and not really believing the massive claim. However, on reaching the best scrape for waders and searching for the Greenshank, that I saw here yesterday evening after the rain cleared, I noticed 18+ large brown lumps moving through the rushes at the back of the field with my naked eye! - Could it really be???

I raised my bins and, yep, a huge patch tick and much wanted after a previous flock of 8 some years ago, before I moved here.

The total was in fact 20 Glossy Ibis, 6 of which were ringed. So I quickly dashed back home for my scope and camera after making a few calls and managed to get some ring numbers - (I shall post records when I have the info.) These birds are possibly from the Donana? White rings with a combination of 3 letters/numbers.

Maybe the largest flock ever recorded in the UK!???? 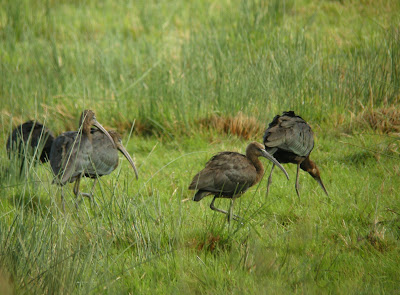 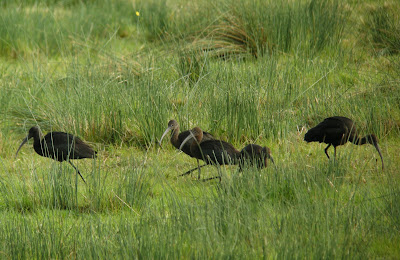